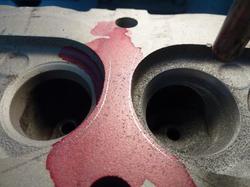 75 degree cutter used to open up intake valve for 1.94 valve.
Herb's 68 Camaro Convertible
Herb called and told me his story on the tired stock 250. His engine was using oil and low on power, causing him to lose fuel mileage and the fun of driving his car. His budget did not allow rebuilding of the entire engine. I suggested a cam kit and performance cylinder head. He decided on the cylinder head. Here are his words. Remember, this motor has over 200,000 miles.

The head was a 1.84/1.6 bolt in lump head. He also said his car performs better than it ever has. And the mileage is higher than it ever was. Infact, he told me people drive too slow, now.